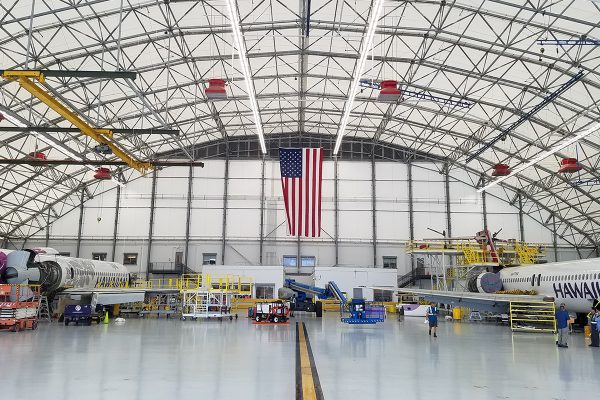 In the airline industry, aircraft hangers are nearly as common to find at an airport as an airplane itself. After all, if a plane uses a field or airstrip, it’s only reasonable to expect that a hangar is nearby. Most within the industry simply assume a plane and a hangar to be a package deal, and for a good reason; why incur the expense of owning an aircraft without having a place to store it that doesn’t expose the plane to the elements? While housing an aircraft is part of the role a hangar plays, it’s not the only function. Hangars also play a key role in maintenance and repair, in addition to aircraft protection.

The Role of Maintenance Hangars

Unlike a storage hangar, which functions primarily to keep an aircraft secure and safe from the elements, maintenance hangars are built and designed with a different purpose in mind. While storage hangars can often be rather small and cramped, barely large enough to hold the aircraft, a maintenance hangar is an open space that functions solely as place where major repairs on aircraft are completed.

For aircraft, a major repair constitutes any procedure that requires the removal and installation of power plants and associated equipment, as well as major structural and airframe components. Additionally, any systems repairs, such as to the flight control, rigging, and landing gear, would also be considered a major repair.

Maintenance hangars are not found at every airport, especially smaller, more regional airstrips. They cost a lot to properly run and maintain, and most major airlines have their own repair hangars they use to conduct major repairs.

The Most Important Features of a Maintenance Hangar

Aircraft are incredibly expensive and surprisingly delicate pieces of equipment to properly maintain. For a maintenance hangar to provide an aircraft with the repairs it needs, a couple of important factors must be considered in order to maintain aircraft protection.

Space is by far the most important quality a maintenance hangar needs as repairing massive aircraft requires a lot of room to operate. When a maintenance team removes an engine, they need sufficient space to work. They need to be able to maneuver the engine stand in place, transfer the engine from the stand to the dollie, and then successfully move the engine out of the hangar to the machining floor.

Aircraft protection also requires being able to fully raise a plane off of the ground to conduct landing gear inspections, post-rigging, and other routine operations. Serious damage can occur to an aircraft when left in such a precarious position, so the equipment and the flooring of a hangar must of be of the highest standard, strength, and quality.

The second most important aspect of a maintenance hangar is protecting the safety of an aircraft while in the hangar. Hangar rash cost airlines billions of dollars each year in unnecessary repairs. Moving an aircraft into a maintenance hangar for repairs, only to have the aircraft damaged due to an unexpected collision or accident will cost the repair hangar money and its reputation.

To ensure that aircraft protection remains paramount, hangars need to invest in the type of custom safety equipment we create at Mantec. We have long developed the reputation as an industry leader in the development and manufacture of the type of custom safety bumpers and custom molded foam that airplane maintenance hangars need to keep aircraft safe and secure. From custom corner rails to ends caps and safety padding, we have the equipment a hangar requires to keep operating costs down and damage to a minimum. Contact one of our sales reps today to learn more about what Mantec means to aircraft protection.